History of the Ward & Kennedy Company

Walter Mettelman, a salesman for the company, is made a stock holder

Founder C.F. Kennedy retires. The remaining stock holders are Mr. Ward, Mr. Mettelman and Mr. Lester Staab who had been given a share of stock a few months earlier.

They decided not to change the name as they were already well known in the footwear industry as Ward & Kennedy Company.

Curtis F. Gleisner (who started with the company in 1945) becomes the sole owner when Mel Rudolf, the last of the 7, retires 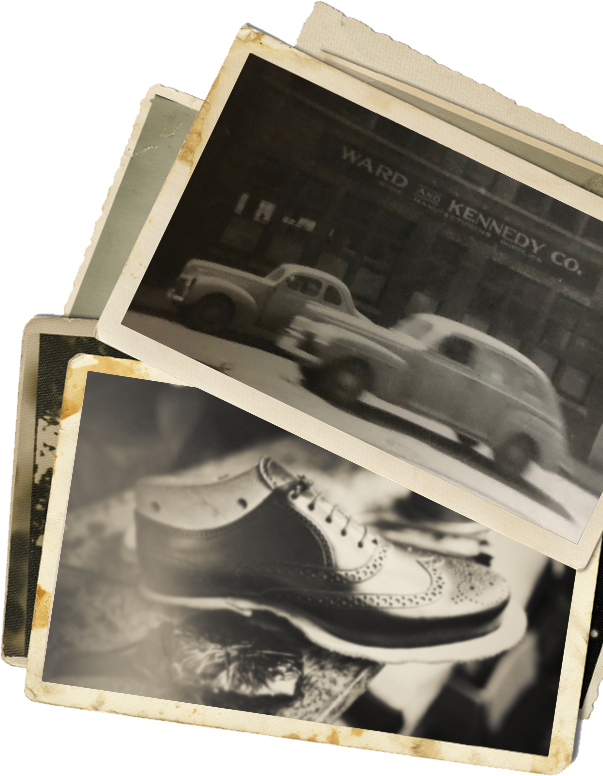 From Footwear to Supply Fulfillment, We’re Your Business Solution

In the 1800s, the majority of United States shoe manufacturing was being done on the east coast. But with more and more people living further west, it was time for a change. By the early 1900s, shoe factories were popping up all over the Midwest and the demand for more local suppliers became apparent. Seeing this, a company who supplied the footwear industry by the name of Manufacturer’s Supplies decided to open a branch in Milwaukee, WI.

They started by hiring Mr. James F. Ward and shortly after hiring Mr. C. F. (Cecil) Kennedy. After a few short years, Mr. Ward & Mr. Kennedy felt that they wanted more control over the company they ran and decided to incorporate. So, on April 18, 1928, Ward & Kennedy Company was born. The strategic plan of the company was to continue as a findings company for the footwear industry. Therefore, Ward & Kennedy Company continued to add new lines to represent and distribute.

In 1929 Walter Mettelman, a salesman for the company, was also made a stockholder.

On August 11, 1943 they purchased the location at 1225-26 N. Water Street which is where they had been renting space since 1936. By 1949 this location housed eight different business; all but one servicing the footwear industry.

On March 16, 1945, Mr. Kennedy retired. The remaining stockholders were Mr. Ward, Mr. Mettelman and Mr. Lester Staab who had been given a share of stock a few months earlier. That year bonuses were given in the form of Victory Bonds.

When Mr. Ward retired in 1963 the company was purchased by some of his employees. On May 3, 1963 Curtis Gleisner, along with Walter Mettleman, Lester Staab, Carin Panaro, Melvin Rudolf, Ray Ettle, and M. F. Kerr, became the new owners of Ward & Kennedy Company. They decided not to change the name as they were already well known in the footwear industry as Ward & Kennedy Company.

A Change in Ownership

Changes in the Market Lead to New Services

The markets that Ward & Kennedy Company has served over the years have changed dramatically. In the 1970s the footwear industry underwent drastic changes as more and more imported footwear caused factories to close, downsize or look to outside sources to provide their shoes. During this time Curt was able to adjust and change the business so that Ward & Kennedy Company did not follow in the footsteps of the many failing shoe factories. With the help of Greg, Mark and Ron Shick, the company began its change by picking up additional accounts outside of the Midwest. The next important change the company made was to begin marketing products that they already carried to other industries such as the Cutting & Sewing trades. Both of these changes helped the company to grow at a time where many of its competitors struggled to stay afloat.

Curtis Gleisner retired on January 1, 1986 and died a little more than one year later.

The old location was leased to Luke’s Sport Spectacular (now Red Rock Saloon), who remodeled it into a bar and restaurant. The change was challenging as the remodeling of the old building was being done before Ward & Kennedy Company had moved out. When the move did occur, it was exciting and stressful at the same time. The offices were originally placed in the store room as carpeting was not installed and the unpaved parking lot created a few problems. Little did anyone ever think that Ward & Kennedy Company and Boston Electric would ever fill the large “footprint” at this new location.

Which brings us to today…

Ward & Kennedy Company once shared 10,000 square feet with 7 other businesses. We are now, solely, operating with 20,000 square feet. In this space we continue to manufacture box toe and counters for the footwear industry, die cut for other industries, warehouse and distribute abrasives and adhesives, along with other tools like wire, eyelets, air tools, spray equipment, heat units and manufacture custom heat presses, steamers and laminating machines.

For over 90 years, Ward & Kennedy Company has served a myriad of different industries and continues to seek out new markets. We are currently:

Contact Ward & Kennedy if you are in need of a custom die-cut or fabricated product or service.